Well, the hinges on the door seem a bit rusty, and there's definitely a lot of dust on the windowsills, but I'll get the blog shipshape in no time...
It's been a busy summer.  After endless soul sucking rain in June and a good bit of July, the sun finally came out.  And then it got too hot and humid to breathe.

So, a summary of summer:
Madman heard a report that we'd had 21 days of rain in June.  I honestly don't recall there being 9 days without rain - I'd put it closer to 3.  Maybe 4, tops.
So the garden is an abject failure this year.  What didn't wash away, rotted in the ground.  The soil was usually too wet to work (and was always too wet to work on my days off), so the only thing growing out there is grass and ragweed.  And 6 corn plants.  And I found a beet the other day.
Not a banner year for gardening.
The goldfinch finally gave up around the end of July.  My guess is he finally suffered a terminal concussion.
Something has been eating our laying hens and got one of our adult turkeys.  We're not sure if it's a skunk, a raccoon, or a fox - all have been seen lurking around here at one time or another.  We've revamped fencing.  Again.
There have been numerous sheep escapes - some more harrowing than others.  (I'll share a few in a later post.)
We lost a mama rabbit, but gained 12 baby rabbits.
All 12 of our Barred Rocks have survived, and are almost ready to join the remnants of our laying flock, once we're certain that we've thwarted whatever carnivore is out there.  There are several roosters in the crowd, who don't know that they're auditioning for the role of Only Rooster in the Coop.  (The ones who get voted off the island will end up in the freezer.)
All 15 turkeys are also still with us.  They've still got some growing to do.  There's been some gobbling starting to go on out there, so we're hoping there's a male or two for our future breeding flock.
I had a lovely vacation, with family visits, yarn, bubble blowing, and a RenFair.

And I had a major milestone birthday.  One of those that end in zero.  There weren't any party hats or balloons, but my daughters kidnapped me and took me on an adventure.  And, as with all really good adventures, I got to wear a superhero costume. 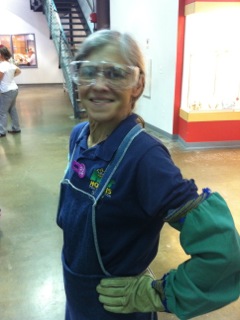 Anyone care to hazard a guess?

Welcome back! I was wondering what you've been up to!
As for your costume... cleaning toilets at the airport? Seriously... no idea - but it looks scary!

No idea. And you are finally forty??

1. Why does ragweed grow so darned well? It thrives where nothing else will grow.
B. A gardening failure year makes us all thankful we do not live in a subsistence economy; otherwise we could look forward to starvation rations all winter.
III. You need a guard llama to protect the fowl.
d. The costume: auditioning for Breaking Bad?

Happy Birthday! Thirty was a good year for me. :D

What a summer. I hope you figure out the varmint situation and it gets resolved. To your satisfaction, that is.

I vote for a guard llama, too!

Or geese. Aren't geese supposed to be good at that kind of thing? Maybe not at night.