And that makes five.

I've been taking my camera out each morning when I do chores, hoping that Abigail would finally get on with it and have that lamb.  Day after day, no lamb.  She just kept getting bulgier and bulgier with no end in sight.  Not off her feed.  Not pawing the ground.
Nothing.
This morning, I forgot to grab the camera on the way out the door.
Yeah.
I was pitching hay and talking to the girls when I realized there was a strange lamb walking around in the shelter, and Abigail was standing there with a puzzled look on her face. 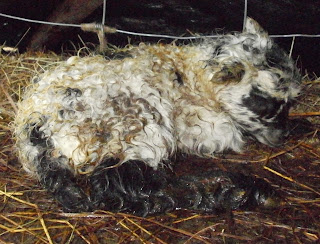 I ran back inside, texted Madman (who was at work), grabbed the camera, and ran back out.  By that time, the lamb had lain down, so I couldn't get a good picture, but here's for starters, anyway.
It's still a little gunky and yellow.  Abigail isn't like her sister, Tiny, who licked her lamb spotless.  ("My lamb is gonna be shiny!")  Abigail is more like her mother, Onyx, who gives some token licks and says "Hey, good enough."
I had to go to work, but I figured I'd get some more pictures when I got home.  But by that time, it was pouring rain, I was tired, and just couldn't face going out with the camera in a 40 degree rain.
The lamb is adorable - black tail and legs, black polka dots (including one giant one) on its back, white ears and face with a black raccoon mask.

Unfortunately, it's a boy.
*sigh*

I was really really hoping it would be a girl.  But somebody had to break the string of girl lambs we'd had so far, I guess.  (I'd just been joking with Madman last night that Abigail would screw it up by having twin ram lambs.  I only missed it by one...)

Here's a picture of Goldie's little girl that I took yesterday.  And it looks like Goldie is going to continue in her history of being a helicopter mom.  She follows her lamb around like a shadow, and chases the other lambs away when they come to ask if Sweetikins can come out to play. 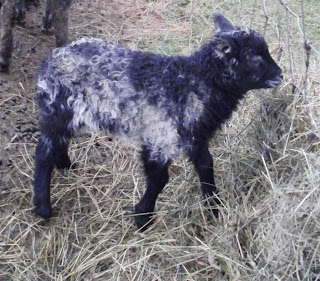 I caught this picture when Goldie and the other moms were busy eating, and the lambs were all happily bouncing and dancing and racing each other.  Though Goldie soon put a stop to that when she suddenly realized her lamb was out there having fun.
"You sit your woolly butt right down there while I eat my breakfast.  Don't pay any attention to those hooligans - they'll only get you into trouble."
Did you know that lambs can sigh?

Awww! You should have forgotten that camera earlier, right? :D